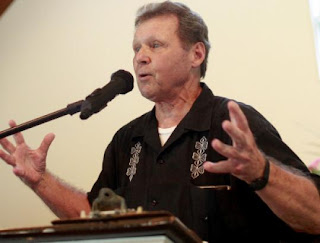 By
Michael Paulson
Globe Staff
August 24, 2009
WESTON - A prominent priest whose support for women’s ordination has him in trouble with the Catholic Church ratcheted up his confrontation with the hierarchy yesterday, calling the church’s refusal to ordain women a “scandal’’ and “spiritual violence.’’
“I will not be silenced on this issue,’’ said the priest, the Rev. Roy Bourgeois, to about 100 people in Weston at an event hosted by the congregation of Jean Marchant, a former staffer for the Archdiocese of Boston who claims she was ordained as a priest in an unsanctioned ceremony four years ago.
The Catholic Church views Marchant and Bourgeois as having been automatically excommunicated for participating in unsanctioned ordination ceremonies.
Yesterday Bourgeois said he remained unclear about his status because he has had no formal communication from his order, the Maryknoll Fathers, or from the Vatican, which last fall told him he would face excommunication if he did not recant.
“If they choose to kick me out of the church because I believe that men and women are equal, so be it,’’ Bourgeois said. “I will never be at peace being in any organization that would exclude others.“What’s going on in our church today is spiritual assassination, it’s spiritual violence being done that’s inexcusable. That is a scandal,’’ he said.
The Archdiocese of Boston yesterday declined to comment on the event in Weston, referring instead to a statement it issued last year saying, “The ordination of men to the priesthood is not merely a matter of practice or discipline within the Catholic Church, but rather, it is part of the unalterable Deposit of Faith handed down by Christ through his apostles.’’
And in 1994, Pope John Paul II declared that “the Church has no authority whatsoever to confer priestly ordination on women,’’ citing both tradition and the fact that Jesus’ apostles were male.For their part, advocates for women’s ordination say Jesus also had women in his inner circle, that polls show most American Catholics support their cause, and that the church faces a crushing shortage of priests.
But church officials say women play other valuable roles in the church, and the answer to the priest shortage is a combination of prayer and efforts to help young men recognize and accept callings to the priesthood.
Bourgeois is the first Catholic priest in good standing to participate in an unsanctioned ordination ceremony held by advocates of women’s ordination. He took part in a ceremony in Kentucky last summer.
In an interview yesterday, Bourgeois, 70, a Louisiana native, said he has stopped wearing a clerical collar and celebrating the Eucharist and other sacraments out of respect for the church’s view that he has been excommunicated.
But, he also said at one point, simply, “I am a priest.’’
He said he is confident his position on women priests is the correct one.“If anyone should be excommunicated, it is the patriarchy involved in this discrimination,’’ he said. “But I don’t believe in excommunication - no one has a monopoly on the truth.’’
Bourgeois said he is winning some support from other priests.
He said five priests around the country have agreed to go public with their support for women’s ordination, and yesterday’s gathering drew at least three archdiocesan priests, none of whom would comment publicly.
Another attendee at yesterday’s event was Joe McLaughlin, 60, a Dorchester native who now lives in Storrs, Conn.
He said he came to the event after becoming frustrated by the diminished role for women at his own parish.
“My sister is a nun, I was an altar boy, and I don’t want to leave. But I get angry now, instead of inspired,’’ McLaughlin said.
Roberta Robinson, 60, of West Roxbury, said she now worships at an “ecumenical Catholic congregation’’ - a group not recognized by Rome - and that she came to the event “to support the movement.’’
She said she believes the Catholic Church will change its position on women’s ordination, saying, “it has to, or it will fall.’’
The event was held at the Congregational Church of Weston, a United Church of Christ congregation.The pastor, the Rev. Joe Mayher, said in an interview that the church regularly hosts Marchant’s congregation, called “Spirit of Life,’’ because “we strongly share their values and their prophetic justice commitments.’’
Michael Paulson can be reached at mpaulson@globe.com.

Get Bumper Stickers at the McAllen Chamber of Commerce. Click on logo to link to the No Border Wall Blog.

US Cost of the War in Iraq
(JavaScript Error)